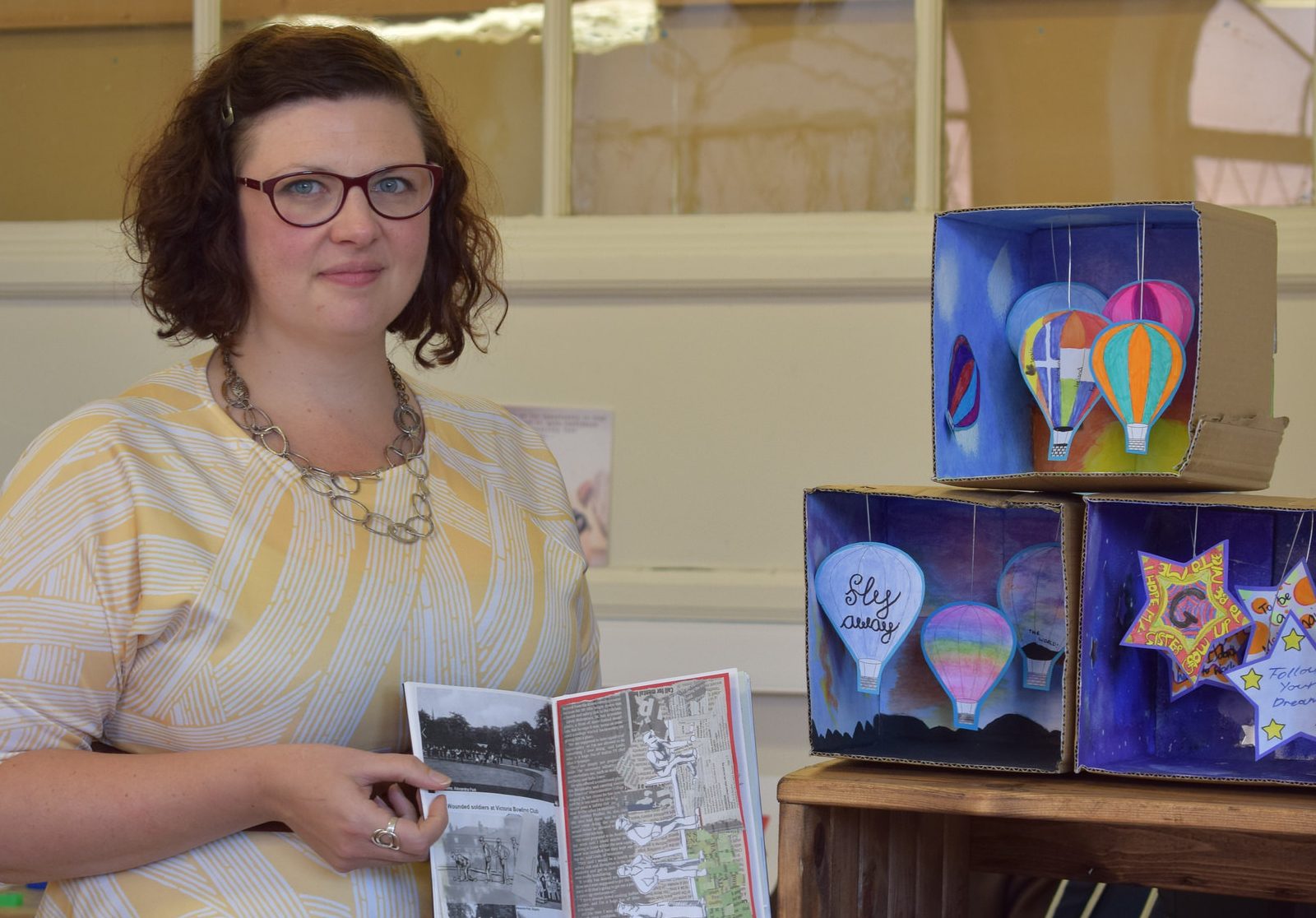 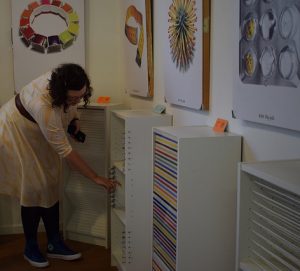 Kath Tindale has volunteered for Arc for 2 years, mainly for the monthly Saturday Art Clubs but she also led a public Drawing Social. Since emigrating to England from Brisbane, Australia, she has worked as an art teacher of secondary age children at St Thomas More RC College in Denton, Manchester.

Kath is currently volunteering as an artist for the ‘We Are Dreamers’ project, commissioned by SMBC, and is in the process of researching and developing one of the 10 soldier boxes that will be displayed at Stockport War Memorial Art Gallery from Remembrance Day 2018.

Kath lives in Reddish, Stockport, so was originally looking for a soldier from Reddish on the More Than a Name website whom she could investigate the life of for her DreamBox, but instead discovered George H Hitchcock, realising that what was most important about her choice about was a good story and a life she could relate to. Kath also felt a personal connection on a deeply personal level with her own family and her father’s involvement in the Vietnam War.

“I wanted to be able to connect with the person and I just found him awesome. Many of the other soldier’s stories were informative, but a bit impersonal.”

George H. Hitchcock’s commander wrote a letter to George’s wife which described aspects of his personality, which really brought George alive for Kath, “…it is no wonder he was so valued by those under whose command he came and that he had so endeared himself to all his comrades.” His words allowed Kath to get more of a sense of who George really was.

George was 32 years old in 1918 when he died, but unlike some of the younger soldiers who left Stockport and did not return, he had experienced many things before he left to fight in World War One. He lived in Edgeley and was married at St George’s Church, which is just south of Stockport town centre on the A6, to an Annie Davies. They did not have any children. Annie moved to Massachusetts, USA to live with her brother after George died, and Kath ponders whether Annie and George had had dreams of moving to the United States together some day.

Before the war, George was a keen member of Edgeley Bowling Club. Alexandra 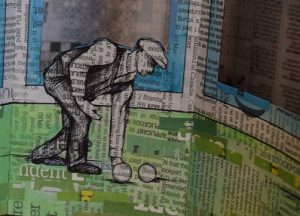 Park has one of the oldest bowling greens in Stockport and when walking the streets Kath saw that people were still playing bowls in the park, as well as socialising and spending time with their families. She imagined that if George had had children, their ancestors may have visited this park, and believes that we are able to enjoy these spaces because of the sacrifice of the soldiers.  George was also a skilled printer, using linotype machines for the Stockport Advertiser and Cheshire Daily Echo Group, now the Stockport Express.

An important part of the process for Kath has been filling in the gaps in history and creating a dream of George’s future-that-may-have-been. She has really enjoyed walking the same streets that George would have walked and has found it a very emotional experience.

The aesthetic of the soldier box

Kath has been inspired by looking at photographs from around the time George lived in Stockport compared to the present day. Her investigation of many a street around Stockport, particularly Edgeley, has led her to notice street art and fixtures that she hadn’t noticed previously, such as historic plaques and community art in the area which she has explored in a lovely sketchbook she uses to develop her ideas and observations. Kath has also found inspiration from gravestones of the era, many of which include symbols of hope, so she wants to incorporate these too.

Originally, Kath found an historical postcard of Hollywood Park as part of her research and wanted to see how the view had changed since then – this will form the second section of the shadow box. There are very subtle differences between the past and the present because Stockport celebrates and maintains many of the historical buildings, notably the viaduct.

Kath’s design is based on tunnel books, which were effective 3D visual storytelling mediums from the Victorian era, which will become a shadow box of several layers that are lit from behind.
Kath has included block printed paper in her soldier box design as a reference to George’s career. She has created her own printing blocks and hopes to include them in the final display. She has incorporated newsprint to create the layers, but only using paper from recycled Stockport Expresses. Issues today include coloured paper and ink, so Kath has used has different colour paper for the coloured parts of her design, for example blue scraps for the sky and green for the bowling green grass. (See photograph of Kath’s work in progress.)

Kath was really inspired by the evidence of George as an endearing and social man and his regular bowls club visits, which began to “paint a picture” of G.H. Hitchcock, a man, a life, more than a name. Therefore, bowling is a central visual motif of Kath’s design. 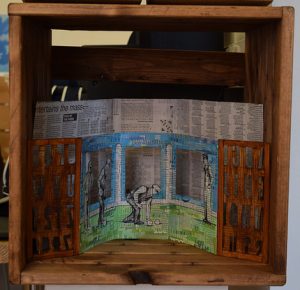 The final section of Kath’s soldier box has become “what you see when you look up” and take notice – a metaphor for the hopes, dreams and aspirations of not only George, but those who walk the same Stockport streets after him.

Kath’s We Are Dreamers pupil project

Kath is also leading groups of teenagers in years 7 and 8 in creating their own DreamBoxes as part of CPSHE (Citizenship, Personal, Social, Health Education, a high school subject). They were given a theme of looking to their futures and exploring their own dreams and goals, a starting point that Kath believes was important to hopefully provide a spark for inspiration of how they’d like to fill their boxes.

One box she brought to show us includes hot air balloons and is inspired by Dr Zeuss’ inspiring and uplifting children’s book “Oh the places you’ll go”.

“You have brains in your head. You have feet in your shoes. You can steer yourself any direction you choose. You’re on your own. And you know what you know. And YOU are the one who’ll decide where to go…” -Dr Zeuss.

She also brought a box full of stars, with the prompt for those being “reach for the stars” – encouraging the young people to consider what their futures could look like if they had no limits to what they could do or achieve.

Kath says she is happy that the project initiated lots of conversations amongst the participating students – about what success and happiness mean to different people.  It has also provided the opportunity for year 9 students to get involved with helping DreamBox contributors with the process and to curate the boxes. 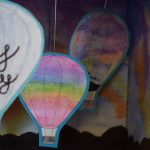 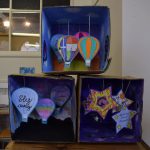 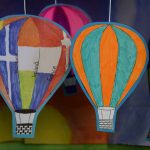 The project has raised a lot of questions for the pupils and provided the opportunity for them to create something with near complete freedom – to do what they want to do as individuals, Kath said,

“..beyond grades, just for enjoyment but also helping them to think about what’s important to them and to create something that they are proud of, a contribution to a collaborative exhibition that their families can come and visit.”

‘We Are Dreamers’ is part of ‘Stockport Remembers’ commemorating the 2018 World War One centenary. 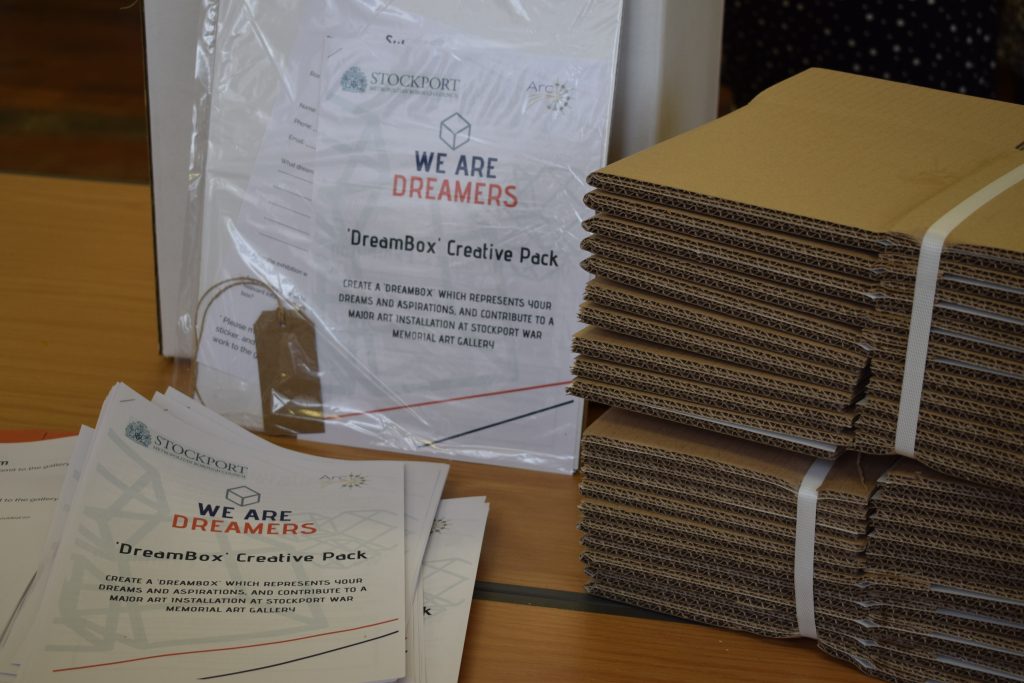 We’ve invited groups and hundreds of people across Stockport to contribute creatively to this exciting exhibition opening on November 11th.